1. PSSM2 is an umbrella term used to categorize horses with symptoms of exercise intolerance which test negative for the PSSM1 mutation. PSSM2 horses do not have a problem with glycogen storage, although old biopsy techniques made it appear as though they did. PSSM2 is not one disease. It is a group of diseases with similar symptoms. 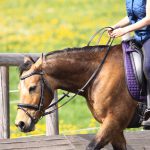 2. Over 370 genes (often with multiple mutations) have been identified as being involved in neuromuscular diseases in humans. EquiSeq has investigated many of these genes in horses with symptoms of PSSM2 and has identified the variants called P2, P3, P4, Px, P8, and K1.

3. The forms of PSSM2 caused by these variants are autosomal semi-dominant with adult-onset. Symptoms are not usually observed in young horses; the severity of disease progression is dependent on the genetic background of the horse, the number and combination of risk variants, and environmental factors like diet and exercise.

5. Biopsy and histology are a snap-shot in time. They can be a helpful tool but are no longer the gold standard for muscle disease diagnosis. Interpretation of a biopsy is dependent on the muscle 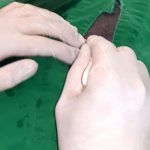 examined, if a horse is having an episode at the time of the biopsy, what preservation and examination methods are used, and how/by whom the histopathology is interpreted. In some diseases, such as in PSSM1, the primary problem is visible: abnormal glycogen accumulation in the cells. However, research has shown that other diseases can also show abnormal glycogen in the muscle that is not due to PSSM1, and has nothing to do with extra glycogen accumulation. It is actually secondary to primary muscle diseases, which allows the glycogen to look abnormal on the slide. Desmin aggregates are also a nonspecific marker of muscle damage seen in some horses; this can be seen as another “symptom” but is not itself a diagnosis. Even the gold standard for PSSM1 diagnosis is now the genetic test, not the biopsy. When an animal has had an episode of muscle damage, the biopsy can show abnormalities, but it can be very difficult to tell if these are due to external damage or if they have a hereditary cause. It is not uncommon for horses to test positive for muscle disease by one pathology laboratory or at one time point, and negative by another
pathology laboratory, or on a future biopsy. If the biopsy is not taken during an episode, or from a specific section of muscle that has been badly affected, the muscle can look histopathologically normal.

6. PSSM1 and the PSSM2 variants are very old mutations and have been found in multiple breeds and even in ancient horses. The PSSM2 variants identified thus far are adult-onset diseases, so 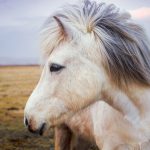 horses often show no/minimal symptoms until after breeding age. The variants can be passed on to offspring before the parent has symptoms itself, which allows the variants to be maintained in the population.

7. PSSM2 is polygenic and multifactorial. This means that many genetic variants can each play a role (large or small) increasing or decreasing the risk of a horse developing symptoms. Multifactorial means that the environment (feeding, exercise) also have a large influence over the development of symptoms.

8. It is important for studies to take all of these factors into account. Mutations being common in a population is not proof that the variant does not contribute to a disease. To the contrary, some breeds of horses are reported to have up to 80% frequency of PSSM1. Many of these horses have no symptoms under optimal feeding and handling conditions. It is the same 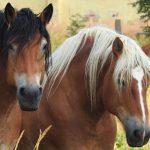 with the PSSM2 variants.

9. Horses can have multiple variants at the same time, each of which increases the probability of a horse developing symptoms. The Malignant Hyperthermia (MH) mutation in RYR1 can worsen the symptoms of PSSM1 or PSSM2. PSSM1 horses that also have one or more PSSM2 variants can be much more difficult to manage, and vice versa. Similarly, having more PSSM2 variants increases the risk of developing symptoms.

10. Some horses with risk variants can be mildly symptomatic or asymptomatic if they are under continual training and optimal feeding. Sport horses and breeding horses often have perfect feeding and husbandry; only when the horse goes through a time of negative nitrogen balance (due to an injury, operation, infection, or nutritional problem) do the classic symptoms develop.

11. Many horses with risk variants that are being trained for high level sport will be sold off when they start to develop symptoms at 5 or 6 years of age or fail to continue developing in their 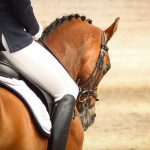 training as expected. The recreational or lower sport rider who purchases the horse will then have to deal with the problems which are exacerbated by the changes in the horse’s routine, exercise and training, and feeding schedules. New owners are blamed for these problems, with the horse’s attitude being describe as a dominant temperament, rather than recognized as a symptom of pain.

12. Studies are ongoing in various research groups, including universities, private companies, and veterinarians examining large numbers of animals. For example, the University of Minnesota is collecting samples from symptomatic and normal horses from around the world, along with gathering detailed information on their feeding, handling, exercise, and evaluating photos and videos of the animals. Hair samples and feed samples from these animals will be used for genetic and nutritional analysis; this type of large study has the potential to help identify environmental factors that increase or lower the risk of horses developing symptoms, evaluate the genetic variants their relationship to specific symptoms, etc. Other groups are working to evaluate the functional effects of specific variants, and their frequencies in different breed populations. 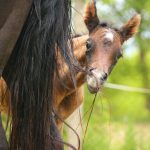 Research into equine muscle diseases is an ongoing endeavor and an exciting area of investigation. The availability of tests for known risk variants enables owners, veterinarians, and breeders to assess the risk status of their horses. Based upon the specific variants and/or variant combinations, they can better interpret clinical test results, plan optimal feeding and exercise protocols and make thoughtful, informed breeding decisions. As new variants and risk/protective factors are discovered, the health and well-being of all horses will benefit.