Which coat color a horse will show is already defined during embryogenesis. Instructions are coded within a horse’s genome. Coat colors are determined by many different genes which influence each other. To this point, mutations in 11 different genes are known to influence a horse’s coat color. These genes are active in different developmental stages of the embryo development and are responsible for several defined tasks. Changes within these stages or tasks result in different coat colors and patterns. 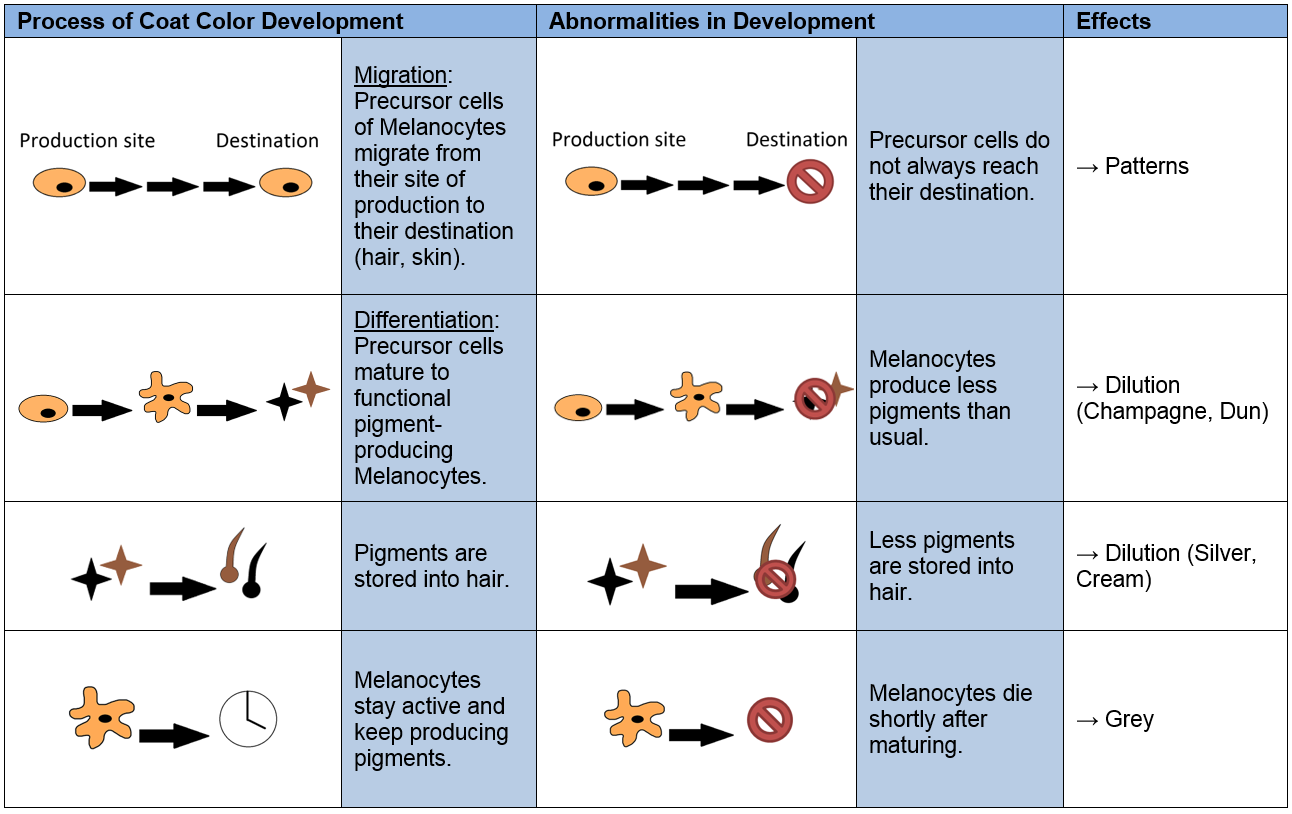 Base Colors: Bay, Black and Chestnut

Skin cells produce two different pigments: Eumelanin (black pigment) and Pheomelanin (red pigment).The amount and ratio of pigments stored in the hair determines the coat color and shade. Production and transportation of pigments are regulated by two genes: the Extension gene (E) and the Agouti gene (A). The Extension gene codes for the production of the black pigment Eumelanin. At least one allele needs to be functional (EE or Ee). If both alleles are nonfunctional (ee), melanocytes are not able to produce the black pigment. In this case the horse will display the base color “Red (Chestnut/Sorrel)“, irregardless of the alleles of the Agouti gene. The Agoui gene (A) is responsible for transportation of the black pigment Eumelanin. In bay horses the Agouti gene is always functional (AA, Aa). It restricts the Eumelanin to mane, tail, head, ears and limbs. If both copies of the gene are inactive (aa), the black pigment is evenly destributed throughout the entire coat and the horse is black. 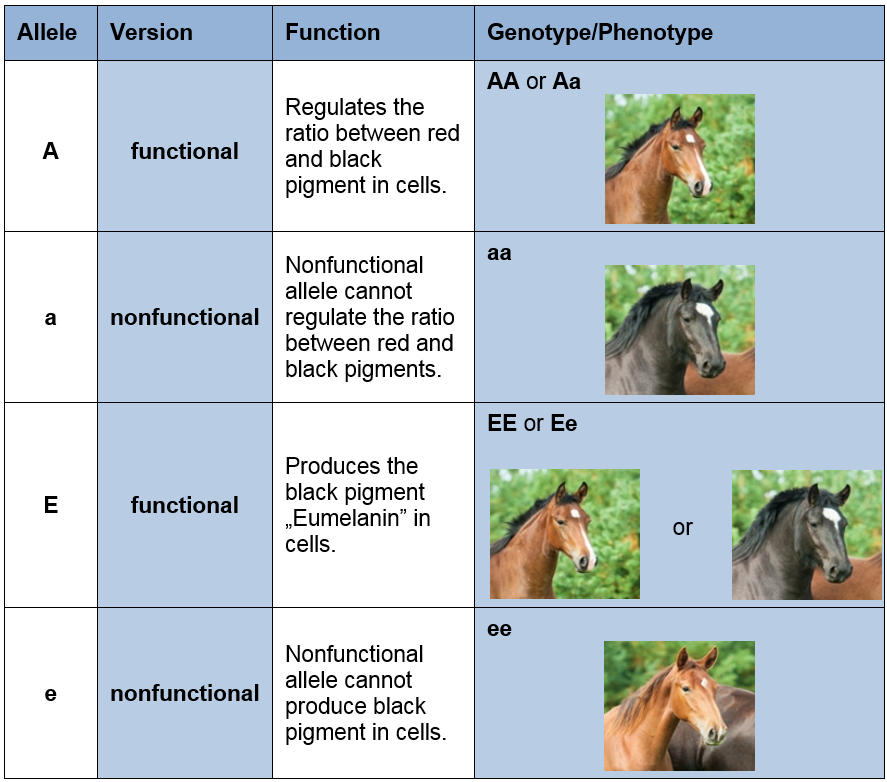 Variations beyond Base Colors

These three base colors are modified by several different factors.

Further details to these modifications are found on the following pages:

Allele: Each variant of a gene is referred to as an “allele”.  Some alleles are neutral and others cause some diseases or traits.

Autosomal: The mutation is located on any chromosome that is not considered as a sex chromosome (involved in the sex determination process (X or Y)).

Chromosome: Located in the nucleus of a cell and is built of tightly packed DNA. The exact number of chromosomes varies between different species.

DNA: Individual genetic information serving as the blueprint for an animal’s development and functionality. DNA is packaged in chromosomes.

Genes: Functional units of DNA that code for specific proteins. The number of genes varies between different species. A horse has approximately 23,000 genes.

Genome: The whole genetic information within one cell or the whole organism (sum of all genes).

Genotype: An individual’s varying allele combinations. The genotype is pictured as a code (see the examples for the modes of inheritance). The code for a healthy or “normal” animal is (N/N) or (n/n); a mutation, when present, is shown with the abbreviation of its associated disease, e.g. (N/ca) or (MH/n).

Mutation: A change in the sequence of the nuclear bases is called a “mutation”. Mutations can occur during proliferation (cell division) or be induced by environmental factors, such as UV rays, chemicals etc.). Often these mutations do not show any impact on an animal’s health. If the mutation happens to be within a DNA sequence that codes for a gene, or influences how much or when a gene is turned on, it may influence health or physical traits.

Recessive: A disease or trait only occuring if a two copies of a mutated allele are present.

X-chromosomal: The mutation is located on the X-chromosome. Diseases or traits with this mode of inheritance develop differently in males and females because males lack the second X-chromosome.