What are hereditary diseases?

Hereditary diseases are caused by genetic variations in the DNA, also called mutations, that can be passed from parents to their offspring.

Often these mutations are “hidden” in an animal’s genome and do not influence its health or appearence. These animals are then called “carriers”.

If two carriers are bred, affected offspring can be produced although both parents are clinically healthy.

A carrier cannot be identified just by appearance – only genetic testing will bring certainty.

The Modes of Inheritance

The following modes of inheritance are explained with examples from hereditary diseases in horses and dogs.  These modes apply to other diseases, traits (like Coat Color) and species as well.

Suggested mating
Mating that should be avoided

Click on the mode of interest for detailed information.

→ Animals with only one copy of the mutation are clinically normal carriers. Individuals with two copies of the allele are affected.

If a carrier is bred to a normal animal:

The offspring should be tested before breeding to identify carriers. 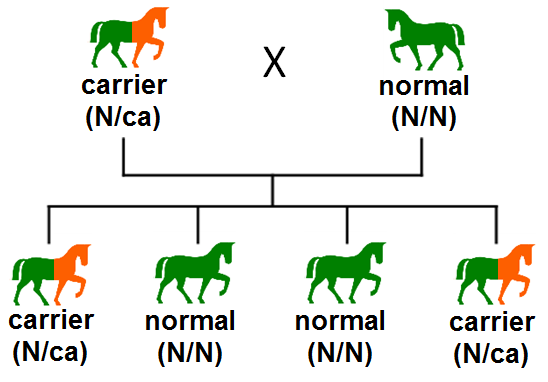 If two carriers are bred:

→ mating with risk of affected offspring 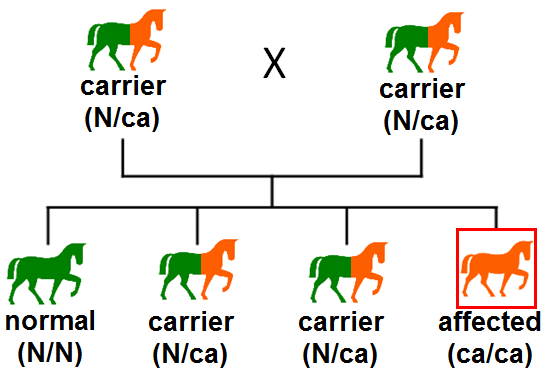 Animals that are affected by an autosomal-recessive hereditary disease should not be used for breeding.

→ Animals with one or two copies of the mutation are affected.

Example with Equine Myopathy/PSSM2 in horses.

Some breeders hope to reduce the appearence of hereditary diseases by not breeding carrier animals. But this may cause an already limited gene pool to be further reduced. A very small breeding population can cause new mutations and thus more hereditary diseases. It is therefore very important not to eliminate carriers from breeding but instead to mate them only with genetic normal animals. Their offspring will not be affected and the breeding population can be stabilized.

The CAG GmbH will determine your animal’s genome and help you to optimize your breeding results while keeping the genetic variability. Please contact us if your questions remain unanswered.

Allele: A certain form of a gene is referred to as “allele”. Two alleles are present for each gene. Mutations in one or both of the alleles may cause some diseases or traits.

Autosomal: The mutation is located on any chromosome that is not considered as a sex chromosome which are involved in the sex determination process (X or Y).

Chromosome: Is located in the nucleus of a cell and is built of tightly packed DNA. The exact number of chromosomes varies between different species.

DNA: Individual genetic information serving as bauplan for a creature’s development and functionality. It’s present as chromosomes in each living cell.

Genes: Functional units of the DNA that contain the code for specific proteines, enzymes and much more. The amount of genes varies between different species. A horse has 23.000 genes.

Genome: The whole genetic information within one cell or the whole organism (sum of all genes).

Genotype: An individual’s varying allele combinations. The genotype is pictured as a code (see the examples for the modes of inheritance). The code for a healthy or “normal” animal is (N/N) or (n/n), a mutation, when present, is shown with the abbreviation of its associated disease, e.g. (N/ca) or (MH/n).

Mutation: A change in the sequence of the nuclear bases are called “mutation”. They can occur during proliferation (cell division) or be induced by environmental factors, such as UV rays, chemicals etc.). Often these mutations do not show any impact on a being’s health. Only if the mutation happens to be within an important coding gene it may cause some health issues or visible changes.

Nucleobases: DNA components defining cellular functionality and an individual’s appearence through their specific order. Variations in their sequence are called “mutations”.

Recessive: A disease or trait only occuring if both alleles show the specific mutation.

X-chromosomal: The mutation is located on the X-chromosome. Diseases or traits with this mode of inheritance develop differently in males and females because males lack the second X-chromosome.